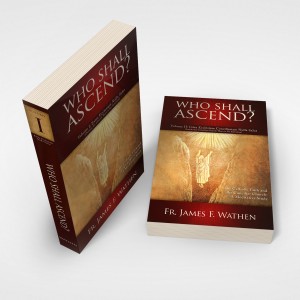 Who Shall Ascend? – Two Volume Set

Volume I of Father Wathen’s “Magnum Opus” Who Shall Ascend? is a comprehensive study of the salvation of mankind, most notably the necessity of belonging to the true Church of Christ–the Catholic Church. Taken as axiomatic by most Catholics until the mid twentieth century, this thrice-defined dogma had, as it’s spirit, the loving goal of real salvation for mankind through the New Covenant which Christ established for the whole world. Father explains how this foundational aspect of the Faith came to be derided and rejected by most modern Catholics, hierarchy included.

In the eternal confusion resulting from the modernist revolution in the Catholic Church and its culmination in the Second Vatican Council, few have come forward to unequivocally challenge the magisterial schizophrenia that has plagued the Church, no doubt leading millions of Catholics away from the reality that is Christ’s Church. Father Wathen produced, in Volume II: Intra Ecclesiam Conciliariam Nulla Salus, a comprehensive analysis of just what had happened to the Church in the past century, and why Catholics who are serious about their faith need to reject the errors, both implicit and explicit, of the post Vatican II church.

Also present is a sound rebuttal of the aberrant social structures which plague the world today, particularly in the fields of economics and social order, which problems have their root in the Freemasonic philosophies of the French Revolution and are still flourishing today.

The James F. Wathen Traditional Catholic Foundation has carefully revised this work, wishing to bring the original self-published title up to modern editorial and typographical standards without compromising the strong message which Father intended to convey. We hope our efforts have done justice to Father’s memory.

Available either in softcover, or hardcover (foil stamped bonded leather)