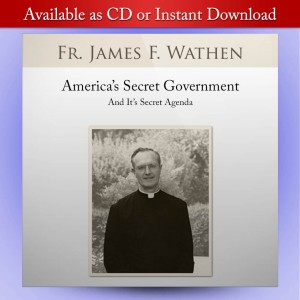 As time rolls by, it becomes ever clearer that the “powers that be” in the United States and their powerful allies constitute a powerful force, ingratiating themselves with power over the increasingly ignorant masses. Assimilating data from many reliable sources, Father demonstrates that, though this subterfuge is secret, it is not invisible. Father addresses the following in this lecture series: